Showing posts from June, 2019
Show All

June 28, 2019
We have a new link to follow to see the youtube channel for the museum. The video now has commentary by Steve which explains all the special events and functions shown in a way that only Steve could do. Cornwall at War Museum video.
Post a comment
Read more

June 27, 2019
Visitors to the museum this Saturday, 29th June, will have the chance to buy second hand books with a military theme from 11 am to 3 pm. The books will be on sale in the hangar at very reasonable prices. You must be a paying visitor to the museum to have access to the sale. Come along enjoy the museum and have a browse at the books.
Post a comment
Read more 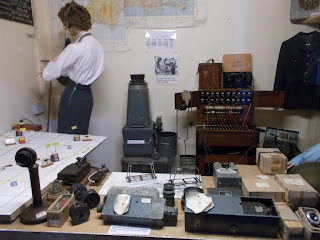 Building 3 was the Officer's Squash Court. It was also designated as the overflow morgue should the need arise. To our knowledge it was never used as such. We have some dioramas in the building to show how various scenes would have been during WWII. The one chosen for today is our version of the Operations Room. The Operations Room was the hub of activity when the squadrons went out on their missions. Although now it wouldn't be deemed as politically correct, in WWII these rooms were mainly staffed by women in the W.R.A.F. A chalk board would display the date, we show 6th June 1944, D-Day, the squadrons and the number of planes from each squadron that had taken off, the time they took off and the time they landed, the aircraft type and the operation they had gone to take part in. There would be a large table covered by a map and the locations of the squadrons and planes could be plotted  by the W.R.A.Fs to show where they were at any given time. This was achieved by l
Post a comment
Read more

June 08, 2019
Apologies for no post last week but I was on holiday. To make up for that we have got something special for you this week. We have our own YouTube channel so you can actually see moving pictures of the museum and special events there! This first one shows the opening of the museum up to the royal visit of HRH Princess Alexandra last year. The sound is sometimes muffled by a howling gale, we are at 1000 feet above sea level. If you can watch it on full screen it will be beneficial. At 50 seconds in to the video you'll see the brick fireplace which was original to the Officers Recreation Room and now protected by a Nissen hut on the original site. When time allows more will be added to the video, especially on those special occasions which tend to happen at the museum. But for now enjoy seeing the place, and Steve and Sheila who have built this place to be something so special. Click on the link below to see the video. Cornwall at War Museum video.
Post a comment
Read more
More posts