Showing posts from January, 2018
Show All

January 30, 2018
If you are enjoying this blog please become a follower. The more followers we get the higher up the Google ratings we go. To see how to become a follower see the "Followers enabled" post. You don't get inundated with emails or anything, it just helps us to see how many of you like the blog. We would also welcome any questions or comments you have. The museum is known as the friendly museum and we'd like this blog to be the friendly blog.
Post a Comment
Read more 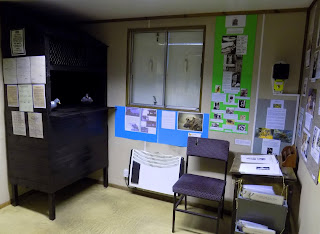 A couple of years ago the Animals At War display was given a make over to help show the true contribution made by so many different types of animals from World War I to the current time. Even with our modern technology animals still play their part from the dogs that make parachute jumps in tandem with their handler, to the dolphins and seals trained to make sure that boats are secure beneath the waterline. The animal that probably saved the most lives during both of the World Wars is the pigeon. In WWI they were a vital way to communicate and in France fields were covered with mobile pigeon coops. In WWII the pigeon was just as vital for communications from occupied territories and also from heavy bomber planes when they crashed on land or ditched into the ocean. Every heavy bomber would carry one or two yellow boxes which each contained a pigeon that had it's home coop on the airfield from which the plane came from. In the case of a plane ditching in the ocean the radio o
2 comments
Read more

Filming "Mir" At The Museum 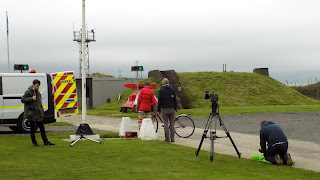 Last year a film production company, Olaus Roe, approached Steve and Sheila to see if they could film some scenes for their forthcoming film Mir at the museum. In one scene Steve had to drive one of his military vehicles at a bicycle belonging to the heroine of the film and knock it over. Dressed for the part in a Russian hat, Steve did the rehearsal and finally it was ready to shoot. The first run wasn't just right so it was set up again for the second take which went perfectly.  The production team were really great people and it was very interesting to see how a film is made. Olaus Roe have said that the film has a long post production phase and isn't quite ready to go to air yet. We hope that they'll tell us when and where we can see it when completed. Preparing the scene. Filming the first piece. Steve hits the bike. Perfectly wrecked. The team with Steve 3rd from left with his Russian Hat.. A bit of post filming fun.
Post a Comment
Read more 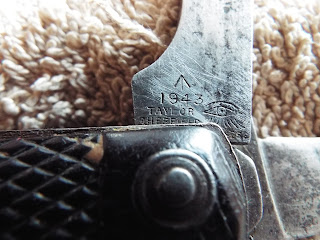 My uncle John is 94 and although he can't make the journey from London to the museum he is a great supporter of it and donates his wartime items when he comes across them. Recently he has sent his R.A.F issue penknife and his R.A.F glasses. The penknife was made in 1943 and would have been attached to a lanyard which in turn was attached to an epaulette. On one blade you  can see the year of issue and the broad arrow which denotes that it is an official military item, and on the other blade you can see very faint marks for every 4/10ths of an inch. It's in wonderful condition and will be put on show ready for the coming season. The official service glasses were especially made so that they could be worn whilst wearing a gas mask. It would be no good being able to breath if you couldn't see where you were going. These are 74 years old and will go on display this year. R.A.F penknife with broad arrow. Both blades of the penknife. Official service glas
Post a Comment
Read more

Things That Go Bump In The Night!

January 14, 2018
Given the history of the museum and airfield it's not surprising that there are things that go bump in the night up there. Actually they go bump in daylight as well and most of us volunteers have experienced "things" from time to time. There's the ghost plane that flies over the airfield at three o'clock in the morning, mannequins that are moved and have their clothes altered in the ballroom and a spirit in building 2. None of our "companions" are nasty, sometimes  they just like to let you know that they're there so absolutely nothing to be scared of. A local paranormal group, Soul Searchers Kernow, run evenings at the museum for other paranormal groups. If your group would like to experience an evening then please contact Bev through soulsearcherskernow.com.
Post a Comment
Read more 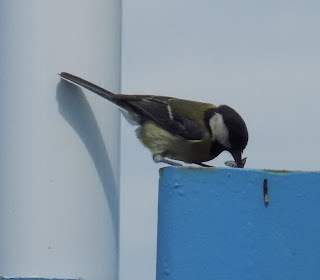 Cornwall is basking in beautiful sunshine today. Early daffodils are flowering along the verges and you know that spring will soon be here. In the spring of 2016 we had a pair of great tits who made their nest in the hollow gate post at the museum entrance. The parents never stopped bringing in food for the young ones, being on the moor there was a plentiful supply of insects for them. We were worried that the fledglings would over heat in the metal post, but they survived and finally fledged successfully.
Post a Comment
Read more

January 08, 2018
Following on from yesterday's Forces TV video a new one has been completed for today. Today's subject is the WWII Bomb Aimer Trainer building on Davidstow airfield. It is being made good again by 4624 Squadron RAF Brize Norton in association with the Cornwall At War Museum. Steve is doing the presentation for the video. Follow the link below to see it on YouTube, or if you prefer it will be on Forces TV at 1pm today, Freeview channel 96, Sky 264, Freesat 165 and Virgin 277. https://youtu.be/kAJFUWOmUJo
Post a Comment
Read more 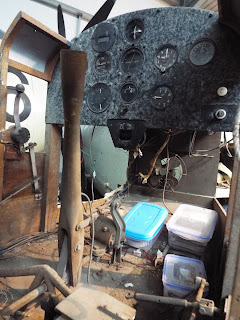 Recently the museum had a visit from the Forces TV crew to film some of our more unusual items, or as the TV crew put it; 3 Incredible Military Inventions That You Wouldn't Believe Existed. In this video they covered a gun from a German U-Boat, a Link trainer and a pigeon parachute. The gun is absolutely huge and thought to be the only one remaining in the world.  The Link trainer will be carefully restored by a team of volunteers. It's thought to be a very early one as it has a joy stick rather than a wheel.  The pigeon parachute is a genuine WWII one which has been brought back to life with the aid of a cardboard box and some sticky back plastic, somebody watched too much Blue Peter! The link should take you to the video on YouTube where you'll hear Steve with his Cornish accent describing these three items    https://youtu.be/p7ANtkGWFQE This is the interior of the Link trainer to be restored. The plastic boxes contain nuts & bolts, not somebody's lu
Post a Comment
Read more 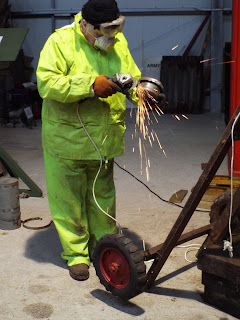 It was cold yesterday on top of the moor, the temperature only reaching 4 degrees at the most. But we're a hardy lot and got on with what needed doing. Steve was outside with contractors laying the foundations for another building - more on that at a later date. Inside the hangar we were painting, de-rusting and Roger was making sparks fly. We think he was only doing that to try and keep warm! It's got to the stage where items we've worked on are being completed and looking very good.  The mobile control tower is completely painted and ideas are being to emerge about what scene to create with it. The cradle for the V1 has been painted and will really show off the V1 when they're reunited. The Gannet paint job is getting there slowly, there's a lot of plane to paint and the lettering and roundels take a long time to do. There's still a lot to do before opening for the season at the end of March but somehow we'll get it all done. Roger making sp
Post a Comment
Read more 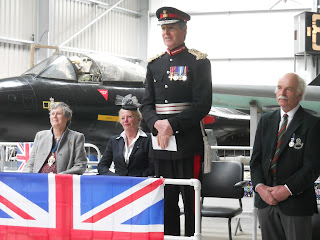 This time last year we were all celebrating the news that Sheila, married to Steve, and the curator and Commanding Officer of the museum, had been awarded the British Empire Medal (BEM) in the 2017 New Year's Honours list. The BEM was awarded to Sheila For Services to Second World War Heritage. Since the museum started off in 2003 Sheila has been the driving force and has worked tirelessly to bring the dream to a reality. From the very early days Sheila was to be seen working harder than many men in freezing conditions. A quality that she still has today. Sheila has the knack of being able to see the abilities volunteers have and gives them the opportunity to reach their full potential, often in excess of what they thought they were capable of. The presentation of the BEM was on the 5th of April 2017 in the hangar at the museum.  Ann Kerridge, chairman of Cornwall Council read the citation for the award and t he Lord Lieutenant for Cornwall, Colonel Edward Thomas Bolitho pinn
Post a Comment
Read more

January 01, 2018
We have now activated the followers option on this blog - we're new at this so things happen when we finally discover how to make it work! To become a follower simply click on the three bars (menu option) in the top left hand corner of the first page and click on the blue follow button. If you use an ad blocker you may  need to disable it on the blog to enable the follow option to work. By using this facility you will be notified of each new post.
1 comment
Read more
More posts