Showing posts from April, 2018
Show All

April 30, 2018
Thank you for the interest shown in yesterday's post.  Coastal seem to be the forgotten heroes and yet they achieved so much, they saved many lives and enabled supplies to get through to the U.K. Like Bomber Command and the fighter aircrews, Coastal were attacked, shot at and crashed. For the survivors in the ocean it must have been an anxious wait for rescue as, unlike on land, they had nowhere to hide and had to be conspicuous to be seen and rescued. They were as brave, and suffered many losses, as any other arm of the R.A.F. I found this poem a few weeks ago. It says it all. No Spotlight For Coastal " Bombers or Fighters?" his friends used to say But when he said "Coastal", they turned half away Yet Coastal's patrols which traversed the Bay Forced U-boats to dive for most of the day. With the U-boats submerged for much of the day The convoys ploughed on, midst the salt and the spray While the men on the ships did silentlypray That his pla
4 comments
Read more 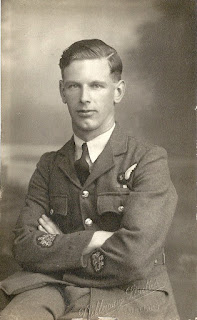 This post is about part of a crew who flew in a Wellington Bomber as part of 612 Squadron and were stationed briefly at Davidstow Moor in April and May 1943. It is a personal post as my late father was part of the crew. In February 1944 the Squadron was based at Limavady, Northern Ireland.  On the night of 10th/11th February dad's plane was flying off of the Western Isles of Scotland. Maxwell Paynter was the pilot, James William McKay the navigator and dad was the wireless operator / air gunner.  Dad glanced out and saw a U-boat quite some distance away. He informed Max and Jimmy, and with the help of a hunter's moon they approached the U-boat. Once over the U-boat the Leigh light was on and they attacked with depth charges. In dad's log book he records that "wreckage was observed, no opposition. Probably 100% kill." Afterwards it was discovered that only one crew member of the U-boat was killed. For this, another attack on a U-boat and other sorties, both M
6 comments
Read more 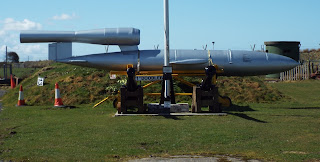 As soon as you enter the driveway of the museum you'll see our replica V1 Doodlebug straight ahead. Although it is a replica it is built exactly to size and is correct down to the precise number of rivets. Many visitors have told us that just the sight of it brings back memories of hearing them whistle as they went over during the war. Whilst you could hear it whistle you were safe, the danger came when they went silent and dropped out of the sky.
1 comment
Read more 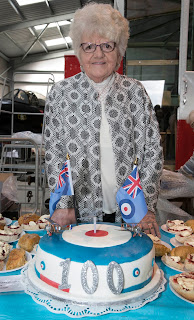 Val Flower from St Mawgan village made this beautiful birthday cake for the R.A.F centenary celebration we had last Sunday afternoon. What a talented lady she is. Val Flower and the centenary birthday cake that she made.
1 comment
Read more 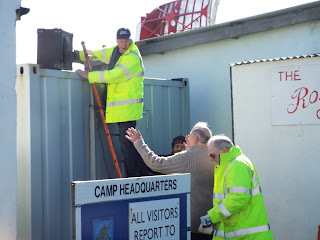 A few shots of behind the scenes as preparations were made for the big day. How many men does it take to move a speaker? It's a long way up. Who wrapped this up? Just a bit further. A little bit further still. What's health and safety? Our own Warrant Officer John Beale who puts most of us to shame with his energy.
1 comment
Read more

The clock tower and weather vane 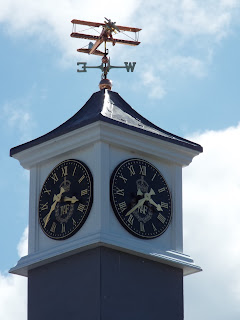 Here is a close up of the clock tower and weather vane which really deserves it's own post on the blog. It is stunningly beautiful and will be a permanent reminder of all the men and woman who have served in the three versions of the service. They were, and still are, prepared to make the ultimate sacrifice for the freedom that we enjoy.
1 comment
Read more 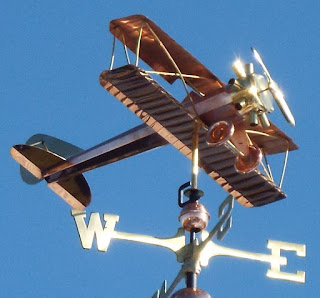 We couldn't believe the beautiful weather we had for the celebration on Sunday, those positive thoughts must have worked. The ceremony took place at 2pm and was started by a short speech from both Air Commodore John Bessel and Steve.  The beautiful slate plaques were unveiled by the Air Commodore and a brass plaque commemorating the event was unveiled by Wing Commander Alex Mason Station Commander R.A.F St Mawgan. The tributes are placed on the old squash court, the three plaques on the apex and a wonderful clock tower on the roof which has an R.A.F clock and the most superb copper bi-plane as a weather vane. The plaques commemorate the Royal Naval Air Service, the Royal Flying Corps and the R.A.F, thus recording the history of  military aviation in the United Kingdom. The plaques are made out of slate and are embellished in gold.  In the afternoon sunshine it looked spectacular. Steve and Sheila planned all of this and made sure it was an anniversary to remember. They
Post a comment
Read more

April 07, 2018
You must have all been sending positive thoughts for the weather as in the forecast there isn't a single drop of rain expected at Davidstow tomorrow. It may be a little overcast, but hopefully the sun will come out from time to time. The main thing is it will be dry for this special day. We're hoping for a good turn out tomorrow so please, if you can, come and meet everyone and have a good look around all the buildings.
Post a comment
Read more

April 05, 2018
A reminder about the celebration for the R.A.F Centenary event. Everyone at the museum is working very hard to get everything ready for Sunday. The weather has been against us getting the exteriors of some buildings painted so they may not look as pristine as we'd like. However, today the sun is out and it will be a hive of industry at the museum.  The unveiling of our tributes will be at 2 pm sharp. It would be wise to arrive from 1pm onwards if you want to watch the ceremony. Remember that a shuttle bus will be running from the car parking facility on the airfield to the museum and back at no extra charge. This leaves museum parking spaces for people who have difficulty walking. Personnel from R.A.F St Mawgan and Air Cadets will be marching, a lovely sight in itself, with the Station Commander R.A.F St Mawgan, Alex Mason, and retired Air Commodore John Bessel doing the unveiling. There will be refreshments available to buy: A mini Cornish Pasty, a mini scone with jam an
Post a comment
Read more 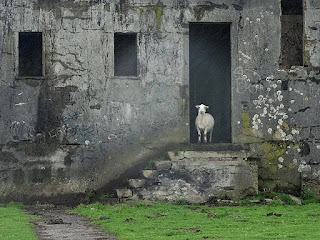 As you will know from the last post we have a big day coming up on Sunday for which we'd like good weather. Actually we need good weather from now for all the preparations, but all we're getting is rain and high winds. When it rains here it really rains, on and on and on. If we all concentrate and send positive, sunny thoughts do you think it would make a difference? Let's give it a go and see if it works.                                             CORNISH LIQUID SUNSHINE
Post a comment
Read more
More posts